I don’t care for any other opinions on the themes of Chimamanda Adichie's Americanah. For me, true love made up one of the predominant themes. A theme I hoped and begged the universe to grant me.

The novel’s heroine, Ifemelu would begin an intriguing affaire with her beau Obi from Secondary School.

They’d go on dating through a few years in University before Ifemelu would leave for the U.S. to get her first higher degree.

As much as I have never researched this, I strongly believed Chimamanda was mirroring a part of her own life’s story in Americanah. 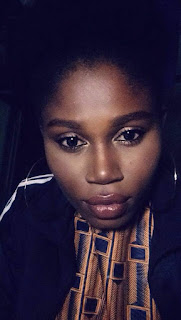 First, Adichie had studied Pharmacy for a year and a half at the University of Nigeria, Nsukka before leaving for the US to get a first degree.

I fed on this keen theory of mine, convincing myself it was thoroughly true and then hoped and prayed for a tailored pattern of romance for myself.

This tailoring of another’s narrative is just the way some Nigerians meet a trusted tailor with a particular design they’d want to be replicated.  Unfortunately, some tailors failed at replicating these designs, leaving their customers dissatisfied and wounded.

Americanah failed me. It wasn’t surprising really. I had always somehow known. Firstly, I had not found a beau in Secondary School. Secondary School for many I presume was exciting. But not for me: a shy, slightly overweight teenager (or so I thought). And ugly,  just like I thought myself to be.

It wasn’t that I was un-smart, I was an above average student. The problem, however, was that I never tried. I lived inside my head a lot. A habit I had adopted from my childhood because my father wouldn't condone any unnecessary noise in his house.

So while I was as quiet as a haunted church, my mind was blazing with discotheque noise. I tried a little though. Especially in Senior Secondary School. I became more involved in school clubs and societies. I managed to remain among the top three of my class and boys started to notice me.

One boy, in particular, pestered me for several terms. And although I never accepted his advances, I was flattered. Someone was noticing me and that meant I was going to be okay in my lifetime.

This boy was not the man of my dreams, however. He was athletic, true. One of the ‘big boys’ in school and had ‘rep’. But other than that, he didn’t spit romantic lines a.k.a. sweet nonsenses, therefore, he remained an unqualified candidate in my romance books.

So when Americanah failed me, I had seen it coming. I wasn’t going to have romance quite exactly early on like Ifemelu had because my beau couldn’t find me in Secondary School. But I hoped somewhere along the line of my life’s journey, I’d experience this artistic, intellectual and painful romance with my true love.

After Uni, things started to happen to me.

Popular posts from this blog

August 08, 2018
If you’re thinking of the next place to tour in Nigeria, get in here, you might just be in luck.

The town of Ado Awaye is fascinating for not only its tourist sites but also its historical mythologies.

This review will help enlighten and prepare you for the trip to Ado Awaye with Lagos as the take-off location. This means your interpretation of logistics for this trip should be measured based on your current location.

Preparation When preparing to tour the town of Ado Awaye, these are a few things to take note of:

1. What to take
Because you’re touring, it is important to travel as light as possible. This means while packing, you should go for only essentials. Try assessing each item you intend to pack with these two questions: ‘Do I really need this?’ and, ‘Do I have another item serving the same purpose this said item offers?’.
Usually, 80 percent of the time, if you find yourself pondering over the above-italicized questions, the item in question will usually not be important.